Nieskes has spent years mastering the art of
manipulation.
control or influence (a person or situation) cleverly, unfairly, or unscrupulously

As a prosecutor in Racine County, Nieskes negotiated, bartered and plea bargained with some of the lowest of low life’s and some of the best cons in the criminal realm.

As the years went by, Nieskes studied, tweaked and assimilated many of these low life skills into his own personal and professional life.
Nieskes especially honed his dark skills in the arts of deception and spin to a point that he is able to manipulate his associates, employees, friends, Judges and the general public.

Nieskes became so proficient at these arts that he can no longer differentiate between truth or his realm,
Nieskes's mind is truly
demented
Suffering from dementia, or driven to behave irrationally due to anger or distress.

As a narcissist, Nieskes hides and denies his past egregious acts and seemingly whines to his associates that he is a victim of a stalker,  but the reality is Nieskes is the viral participant of what he negotiated.

Nieskes is so proficient at the art of deception that he is able to manipulate others to defend his name and do his dirty deeds for him.

Nieskes is also an opportunist, or perhaps even a predator. A predator the likes of former Calumet County District Attorney Kenny Kratz. Yes the same Ken Kratz of National District Attorney Wall of Shame fame who used and abused his position of power that preyed and manipulated on the weak minded, the innocent, the trusting, the naive and of course the
stupid.
Lacking intelligence or common sense.

And speaking of common sense........
Do you think Katie or Mary of the below posts have ever heard of
Martin Niemöller. ?

Do you think they have ever been maliciously prosecuted?

Read what these two women had to say about us. 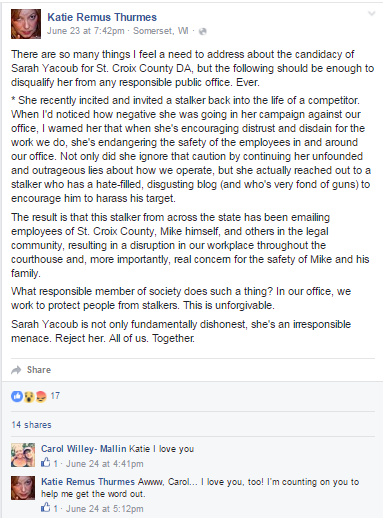 We feel badly for these women as they do not understand the beast to which they unwittingly throw their support to.

Had Katie or Mary spent 20 months fighting the liar Michael Nieskes as we did, they just might feel a little bit differently and empathize with our point of view.  We ask for no empathy, just an unbiased open mind to the facts.

As for Katie's statement of a hate filled disgusting blog, wrong again, We print the truth and often interject humour and satire along with the truth.

For Nieskes, the truth we print is of his own making.

In the year 2011, Nieskes had his chance to reconcile with us, due to his arrogance he chose not to.

Nieskes is a bad negotiator.

This is what Nieskes negotiated with us.

Nieskes got what he negotiated !

We further quote Katie Remus Thurmes
" The result is this stalker from across the state has been emailing employees of St. Croix County, Mike himself and others in the legal community, resulting in a disruption in our workplace throughout the courthouse, and more importantly, real concern for the safety of Mike and his family"

We suggest that Katie publish those emails and further explain to the public how those emails have created a "disruption" in the workplace and especially throughout the courthouse.
We all could use a really good laugh!

After those emails are published, then explain why there is real concern for the safety of Nieskes and his family.

Is Katie's concern for Nieskes's safety a result of enlightenment or an epiphany that Nieskes should be in prison and may become a p
risoner's girlfriend?
Oh the slippery slope of soap !

If Nieskes truly had a legitimate reason for concern to his safety, as a narcissist Nieskes would  have used his unbridled powers that Eric Johnson bestowed upon him as Deputy District Attorney and acted upon us.

The reality is Nieskes is a fraudster, a liar and an unconvicted criminal that belongs in prison due to his past egregious acts. Nieskes drew first blood. Nieskes abused his power in office by maliciously biting a dog who bites back.

As for Mary Yacoub, Mary gave Nieskes a 5 star rating as a judge in Racine County.  Her 5 star review of Nieskes here:

https://www.google.com/#q=mike+nieskes+
Our readers informed us that the site would not open using cell phones, so we have published her review below.
Thank you readers for your input. 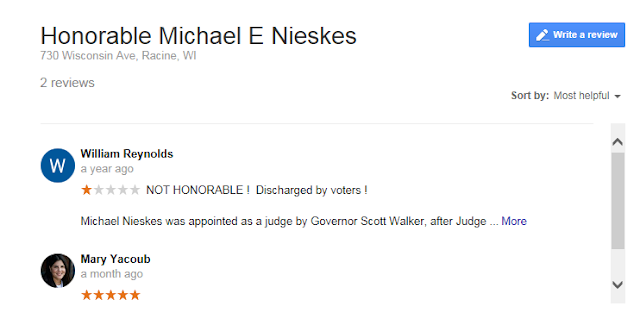 Do you think Mary ever went to Racine County to vet Nieskes as a Judge?
We didn't think so either.

As for Mary's comment referencing lying to get ahead in life, We are already ahead in life, we print truthful facts and do this in the spirit of Martin Niemöller and our
Pro bono publico /politico platform.

According to online social records, It appears Mary is politically motivated for personal reasons, not because she has done due diligence and properly vetted the St. Croix County District Attorney candidate Michael Nieskes.

Hey, but at least Mary and Katie are talking about the most powerful and influential office in the county.

We at St. Croix County Corruption may often disagree with opinions or comments, but we always agree to disagree, all part of a functioning political process that enhances and benefits the whole community.

It is in the communities best interest that discussions regarding the candidates of the office of district attorney be fully encouraged and engaged even though you may not agree with one's political point of view.

Words and opinions are to be considered along with evidence and facts.

Choose carefully as the District Attorney's office has the power to change, alter or destroy lives.
An office that must be held by a person of impeccable character, and the facts prove that Michael Nieskes is NOT that person.

Michael Nieskes's successor in Racine County was apparently so moved by the egregious and illegal conduct of Micheal Nieskes's that he moved the court to dismiss the case with prejudice.

Ask any attorney or Judge what dismissed with prejudice represents.  If you already know the answer and still support Michael Nieskes, then you are like a thirsty horse who has been brought fresh, clean water and refuses to drink.

Folks, our only interest in the St. Croix District Attorney office is thwarting Nieskes's attempt to again become an elected official.

Nieskes's past unethical, egregious and criminal conduct makes him unfit for public office.

Nieskes violated the trust of the public, is an unconvicted criminal who subverted citizens rights and filed a false affidavit into court records.  Those are the irrefutable and indisputable facts.

We have no stake in the candidates
Donna, Sarah or Rory.
We wish them well

Folks, as more of the truth is published, more citizens should realize that Nieskes is a fraud.

After reading Martin Niemöller, You will realize it is Nieskes who is the clear and present danger, but not to us, it is to you, the St. Croix citizen.

Nieskes has history of abusing the power of the office of District Attorney and subverting citizens rights, as such Nieskes should never be allowed to hold public office again.

While we enjoy bringing to the St. Croix readers our Pro bono publico/politico forum, we also enjoy the side shows of Mary and Katie, and perhaps we can get Art Juchno and Susan Stori and others to pipe in.

Our readers should be aware that our best writings
are in the form of satire.

St. Croix County Corruption is a paper tiger whose only power comes from you, the informed voter.

Lions and Tigers and Bears,Oh My!

roar
run for your lives
roar

Posted by legal stranger at 9:54 PM